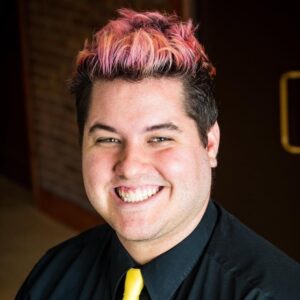 Patrick Hanlon graduated from Robert Morris University with his Bachelors in Theatre Communications. He moved to Cleveland in 2016 to put his degree to use and was not slow about it. He started with working part time for French Creek Theatre, Playhouse Square, St. Igantius’s Breen Center, and Karamu House – doing various jobs such as House Manager, Box Office Attendant, and Season Ticket Services. He was ecstatic to be taking on the role of CaBARet Coordinator at Western Reserve Playhouse where he shared pieces of theatre that audiences know and love, or will know to love. He remembers back in 9th grade when he stumbled upon a YouTube gem (Titus Burgess, singing “Quiet”) and knew from then on out that he needed to share with world genuine pieces that truly captured the human experience. The first thing that was to come out of the CaBARet series was The Villains CaBARet in January 2020. It was such a success that we were quickly onto the other one when the COVID-19 theatre shutdown happened.

Then, like a phoenix rising from the ashes and the CaBARet series holding true it’s word, we successfully put on a virtual version that still captured its original intent: WRP’s Greatest Hits and Those That Should’ve Been. With Tiger King, Making a Murderer, Casting JonBenet, and many more, documentaries were taking living rooms by storm and had become a viewing staple in so many homes across America. The CaBARet series took a part of that style of content and made a musical version of it. All of this was from the comfort of your living room. WRP’s Greatest Hits and Those That Should’ve Been was full of songs from musicals that happened at WRP in the last three years and songs from musicals that were supposed to happen in 2020. On top of that, actors were sharing with you some personal stories. This content was not for faint at heart, as a lot of these actors have not performed on a stage since March 2020, at the earliest.

In 2021, even with the shutdown still occurring, Patrick hopes to continue to deliver you the same content, virtual or non-virtual. The one thing that will remain consistent is real human emotions and talent.